When talking about cultures, we tend to either put people in boxes (stereotypes), or conversely ignore differences (“we are all human after all”). This is especially true with cultures that seem close to our own, by geography or language. As a French person relocating to the Netherlands, it took me quite a while to become truly aware of the differences, and to understand how to best work with them.

I moved to Amsterdam after two years in Houston, Texas, and I thought that returning to Europe (especially to the lovely city of Amsterdam) would be easy. And it was easy; I very soon felt at home (especially because I had lived in the Netherlands before). Unconsciously, I folded up my “intercultural antennae”, which had been quite useful in Texas.

My situation was all the more comfortable in that I was working for a French organization, where half of the team was French and the other half Dutch; mostly young women, open-minded and friendly. Yet, I progressively realized that there was still one crucial difference between my Dutch colleagues and myself: attitude towards our French company director. In meetings, for instance, some of my colleagues expressed their disagreement quite bluntly, mixing polite French formulations with what I considered slight effrontery. Their attitudes deeply irritated our director. At that time, I did not really give it deeper thought, considering it all to be a matter of diverging management styles.

It was only later, in a totally different setting, that I started to really question the origin of those diverging styles. When my daughter started to strongly express her opinions and choices at a very young age, I began to feel like the proverbial “bad cop”. At school, at the crèche, I could see other adults (Dutch parents) blessed with an angel-liked patience, systematically consulting their children, involving them in important decisions – while I was quite often trying to unilaterally impose things on my child. I was suddenly struck by my cultural identity – was I experiencing culture shock after 10 years in the Netherlands? I started to ask myself questions about education, authority, equality – without judgment, simply trying to understand what the deeper values motivating those different behaviors were. If so far I had felt the differences diffusely, it was now time to really analyze and understand them.

This is when I started to (finally!) really understand that for my daughter, just like for my Dutch colleagues, there was no reason that someone else (a manager or a mother) should impose their authority on them. In both cases the tension came from different ways of relating to authority (or power) between the French and Dutch cultures. French people tend to be more tolerant of authority, more easily accept status differences and privileges related to someone’s position in the society or an organization, because this is part of the value system they have grown up with.

Comparatively, the Dutch culture is more egalitarian. If you ask a Dutch person to explain what hierarchy is, you might be surprised by their difficulty in answering the question. They grew up in a context in which you call your teacher by their first name, just as you do your manager later on, who is sometimes referred to as a colleague rather than as a boss. And the kids or colleagues who seem to answer in what from a French point of view is an irreverent or insolent way are, from a Dutch perspective, simply expressing their opinion, which is just as valid as any other.

A conversation my Dutch husband and I had around the time we started dating came to my mind:  he said that French society was elitist, which upset me. I argued that the French motto “Liberté, Egalité, Fraternité!” was no accident. It took me quite a bit of time to understand both his perspective and my frustration when he expressed it. It all became clearer when I really started to delve into cultural differences.

Understanding this crucial difference, I became able to take another look at many aspects of Dutch culture. Equality is a fundamental part of all aspects of the Dutch society:*:

What is better… is not the question! It is all about keeping your intercultural antennae active, to be able to sense differences and their underlying values without being judgmental. Culture is a complex notion; underestimating differences and making judgments in terms of good and bad are means of trying to get to grips with culture, to simplify and reject complexity and ambiguity. However, if differences can create stress, being able to identify and respect in order to better reconcile them is a big step toward self-balance, personal growth, creativity, and innovation!

Coming from abroad to the Netherlands, understanding cultural differences and knowing how to deal with them is very helpful to becoming more comfortable in daily life and more efficient in the work environment. The process includes 3 steps**:

When different perspectives meet, they can result in fantastic and innovative ideas! As for me, I often question my vision for raising my children, and many other things – equality being only one aspect of the many differences that exist between the Dutch and French cultures. I try to have a systematically open mind to understanding different perspectives, and I help others in doing the same.

* From Geert Hofstede (Cultures and Organizations – Software of the mind).

** This 3-step approach is a free adaptation of Fons Trompenaars. 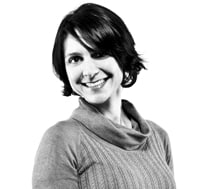 As a cross cultural trainer and coach, I help individuals and teams to develop greater self-awareness and cross-cultural effectiveness for better work performance and more individual happiness.